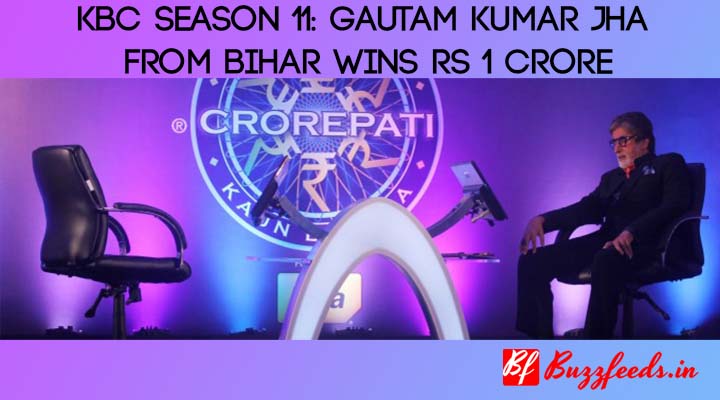 About KBC – KBC is an Indian television game show based on a British Programme Who Wants To Be a Millionaire? The first 3 seasons of the show aired on Star Plus from 2000 to 2007. After 2010 It has been broadcasting on Sony Tv.

Kaun Banega Crorepati is a quiz game show started on 3rd July 2000. The Game Show has been telecasting on Indian Television from the day and till now It has completed It’s 10th season and the 11th Season of KBC is going on.

This quiz show is almost incomplete without churning out at least one contestant who wins Rs 1 crore or more. Here, the audience got to witness two winners who rose to become the winners of the staggering amount with their wit and dedication.

He was successful in answering all the tough questions that helped him to reach to the Jackpot Question of amount Rs. 7 Crore. The episode will be telecasted on the upcoming Monday and Tuesday on Sony TV.

All it’ll take is just one right answer for Gautam to be this season’s first contestant to win the Jackpot amount of 7 Crore. Catch the gripping moment on #KBC11 this Tuesday & Wednesday at 9 PM. @SrBachchan pic.twitter.com/UsYfQPwVAw

He is the third person from Bihar to be a crorepati at Kaun Banega Crorepati Tv Show following Sushil Kumar, who had won the Jackpot of Rs. 5 Crore in KBC 2011.

The family members of the Gautam were more than happy about his success. This is the 2nd time when KBC 11 crorepati is from Bihar. Previously Sanoj Raj a UPSC aspirant was the first crorepati of KBC Season 11 is also from Bihar.

Sanoj Raj belongs to Jehanabad district. He was also successful to reach to the Jackpot question of Rs. 7 crore. But he failed to clear that one and quit the game with an amount Rs. One Crore.

Gautam quit the question of Rs. 7 crore and managed to win the amount of Rs. 1 crore from the KBC. He was not sure about the final question and no lifeline left to take help.

The 7 crore question to Gautam was

What was the name of all three soccer clubs set up with the help of Mahatma Gandhi in the early 20th century at Durban, Pretoria, and Johannesburg?

The correct answer to this question is the option “c” Passive Resisters.

He dedicated the amount to his father. He had said in a statement, “He couldn’t finish his studies due to our family’s condition. We concentrated on our studies so that we don’t have to face that situation.”

Coming back to the winners of season 11, it is indeed heartwarming to see how the years of study and mindfulness has come to fruition for them. This sure will inspire many others to take part in the show and try their luck and wit.