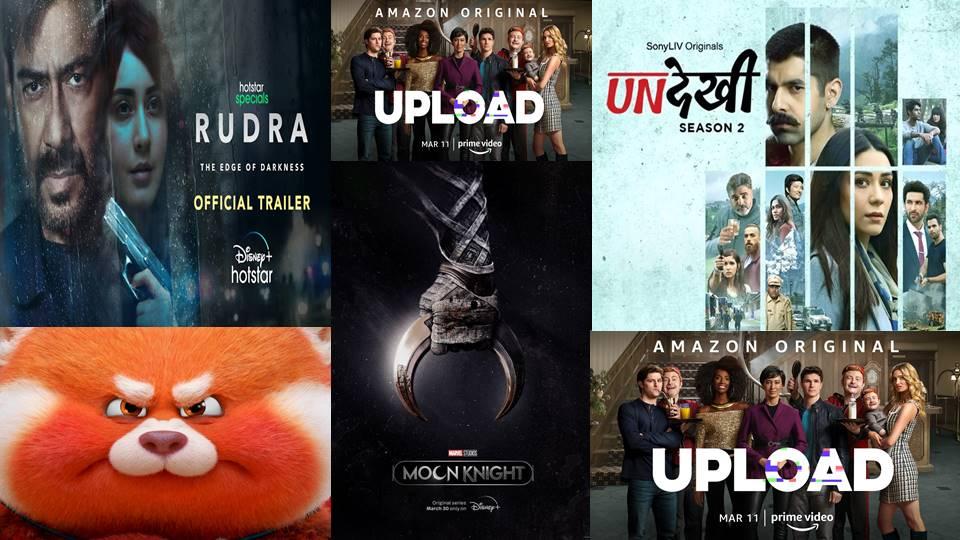 March 2022 Releasing Web Series: List of upcoming shows on Hotstar, Netflix, Amazon Prime Video- There are many of you who like to watch web series and new shows and are always in search of new shows and web series. No need to panic you have come to the right place, listed here are the new series that will be released on OTT this month. You can see the full list of titles to be released in March 2022 in this article.

The coming month is going to be full of thrillers and entertainment. We are saying this because in March 2022 all the OTTs are going to release some such movies and web series which will make you surprised.

Ok, for our readers we have listed down all the popular web shows that will be released in the upcoming month in India on streaming platforms such as Netflix, Amazon Prime Video, Disney+ Hotstar, Zee 5, Sony Liv & Voot among others.

Rudra: The Edge of Darkness

Storyline: The series is a remake of the successful British series ‘Luther’ and we will see Ajay Devgn in the lead role in this series. This story will be the journey of a cop to uncover the truth and bring justice to the victims which look quite interesting from the trailer. Produced by Applause Entertainment in association with BBC Studios India, the series stars Ajay Devgn, Rashi Khanna, Esha Deol, Atul Kulkarni, Ashwini Kalsekar, Tarun Gehlot, Ashish Vidyarthi, and Satyadeep Mishra in pivotal roles. For information, let us tell you that along with Hindi, it will also be released in Tamil, Telugu, Kannada, Marathi, Malayalam and Bengali.

Storyline: The second web series is Undekhi Season 2. The first season was very interesting with a strong story. Actor Nandish Singh Sandhu is all set to make his debut in OTT with ‘Undekhi‘ Season 2. Dibyendu Bhattacharya, Harsh Chhaya, Surya Sharma, Ankur Rathee, Anchal Singh, and Abhishek Chauhan did fabulous work in the first season. The second season takes their story forward with the Atwals facing a tsunami of challenges with Samarth’s entry.

Storyline: In association with Ekta R Kapoor and Jio Studios, Apharan 2 is all set to release. It is coming again to entertain you with its core message – ‘Sabka Katega’. In this, you will get to see double the tadka of drama, thriller, crime and action. The riveting series will also see legendary actor- Jitendra Kapoor along with Arunoday Singh, Nidhi Singh, Snehil Dixit Mehra, and Sanand Verma.

‘Sutlia‘ is the story of a family that will touch your heart. In this, adult children return to their family home in Bhopal, but in the story they are burdened with the emotional burdens from the past and unresolved conflicts in relationships. This journey is going to be very interesting. If you like this type of story then you must watch it. This will be going to release on Zee5 on March 4.

The film revolves around a person (Reynolds). who travels back in time to get help from his 13-year-old self. Together they find their late father (Mark Ruffalo) who can correct the timing game so that the future is not threatened.

Nathan reaches the afterlife in season two of Upload. His ex-girlfriend Ingrid is back but his heart still secretly dreams of his customer service angel Nora.

The first season of “Bridgeton” depicted the story of the romance and marriage between the eldest Bridgeton daughter, Daphne (Phoebe Danever), and Simon Bassett, Duke of Hastings (Reggae Jean-Page). The second season is all about Lord Anthony Bridgerton (Jonathan Bailey), the eldest Bridgerton sibling and Viscount, as he sets out to find a suitable wife.

Moon Night will be available to watch on Disney Plus Hotstar on March 30. The limited series from the house of Marvel Studios stars Isaac as the eponymous character, which was first created by Doug Moench and Don Perlin in 1975 for the comic series ‘Werewolf by Knight’.

Moon Knight is a character known for his antisocial identity disorder, is the secret identity of Marc Spector. Spector, a former CIA operative turns into a mercenary, who dies during a job in Sudan but is revived and turned into the conduit of the Egyptian moon god Khonshu.

Actors Jaideep Ahlawat and Zeeshan Ayyub will be seen in the lead roles in the web series ‘Bloody Brothers’. This web series has been directed by Shaad Ali. The six episodes series produced by Applause Entertainment in association with BBC Studios India will release on ZEE5 in March 30.