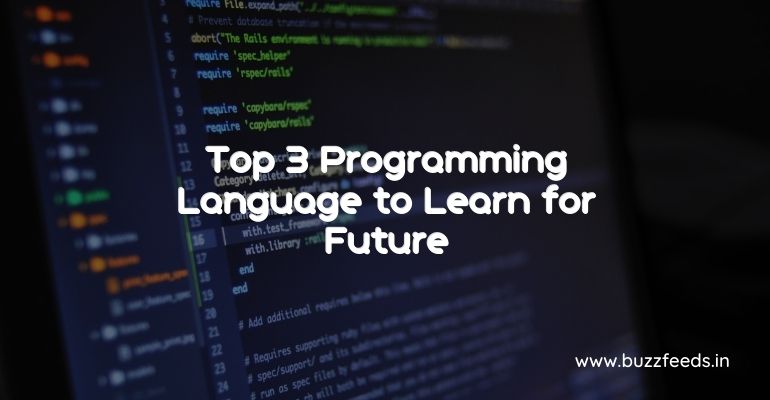 We will be sharing the name of 3 Programming languages for the future, ranking them by 1, 2, and 3. We will be looking into it based on the various parameters like the user interest in learning the language and the salary expectation of the Developer for the Particular Language.

Also, I will be sharing my own experience with all 3 languages which we are going to talk about.

Companies are offering a very high salary to the Developers and probably more than any other language developers. Python is a very popular language for not only Tough programming like AI but also for data science.
Python is the highest using language for Data Science because its easy to code and Execute on the server.

I will highly recommend you to learn Python as your first Programming language. You will get a High salary job as well. Companies like Google, Netflix, and other Big MLMs are looking for Python Developers for the post like AI developers, ML developers, Data Scientists, and many more.

It would be best to choose this language as your first language because it is easy to learn for someone with no experience in Coding.

Java is an Object-oriented programming language that empowered Mobile app development a lot. Some of the famous mobile apps like Spotify, CashApp, Signal, and even Twitter are built on Java.

Since Java appeared the first time, it became the very first choice for application development. It can be used to develop a very high end and futuristic apps.

Java was originally launched by the name of Oak and then renamed to Green and finally to JAVA. When we talk about JDKs’ versions, it was released first as JDK beta in 1995, and recently on 15th September 2020, it got its update to Version JDK SE 15.

JavaScript is also one of the best languages to learn. JavaScript is also known as JS and is completely different from Java. Java runs on the compiler, while JS can be run on any browser having a javascript parser.

It can be coded once and can run on any device with the same code snippet.
You can write a code once and run that code on Android, Mac, Ubuntu, or even Windows.

JS can be used to create hybrid Web applications as well as Mobile Applications. JavaScript has evolved itself so much that it is possible to create VR or IR applications for Android, iPhones, windows, or even the Web.

JavaScript is also used to develop applications for spaceship because it is lightweight and can be run anywhere and in any browser. It is also easy to learn as it consists of many basic concepts like Variables, tuples, and loops. So if you want to learn JS as your first programming language, you can definitely give it a shot.

Android 11: The OS that knows what’s important and when

WhatsApp vs Signal: Which one is Safer to Use in 2021